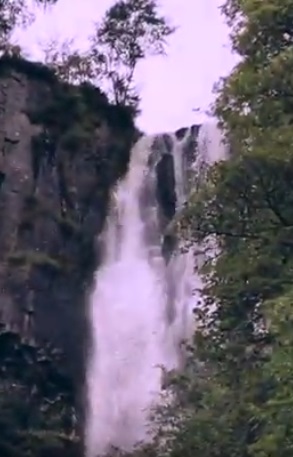 Down comes the water, the crops grow tall
So many secrets, hidden in the waterfall . . .

The 'The Waterfall Song' was born on the night of Monday, 12th August, 2019, as I was watching the ten o'clock news. A short piece about 'The Great Green Wall' project, which aims to plant a wall of trees and bushes across the African continent to combat the destructive effects of climate change, caught my attention as I was strumming my guitar and enjoying a glass of tequila and orange juice. I was messing around with a simple three chord tune with the word 'waterfall' in mind and I decided to see if I could, in some way, contribute to a cause important to us all. The epic project has been on the go for a while but that was the first I'd heard about it.
After giving the matter some careful thought, for about thirty seconds, I put a note on my Facebook page inviting musicians to collaborate on the recording of 'The Waterfall Song' and just see what might transpire. The response was great and many friends, old and new, got in touch to say they'd like to play a part. The next move was to record a very basic version of a bit of the song so I could email the interested players an mp3 that they could add their bit to. Meanwhile, the son of one of the musicians, who by sheer coincidence had been filming a waterfall in Wales a few days before, offered to put together a video for the song. (That's his photo, on the right, 'Pistyll Rhaeadr'. Nice one, Olly).
Over the following few days emails began to arrive in my inbox with various bits and pieces of music from folks on both sides of the Atlantic and the ball was rolling. Always great to work with people in this way and let the song develop its own shape and character as the different ideas and sounds come together.
It's the morning of Sunday, 18th August, and I'm just about to make some coffee, fire up my recording gear and put a shift in. I wouldn't be at all surprised if some more stuff arrives as the day rolls on.

Wednesday 21st. Smallpipes from Brian Robinson a clarsach part written by Emil Thompson and played by Rebecca Sharp and vocals (and tambourine) from Nancy K Dillon.

Thursday 22nd. Just after 9 am and I've already been working on the track for three hours, pre-breakfast mixing session. It's a bit like when I occasionally decide I'm going to cook something, open the cupboards and see what's there, a bit of this, a handful of that, a splash of this and a drop of that. Usually turns out alright. Putting this tune together is a similar deal, but with sounds.

Friday 23rd. A few dobro licks from Sarge Frampton and a general tidy up.

Tuesday 27th. After a couple of days messing about in the sunshine, back on the case with backing vocals from Emily Andrew, Kelly Seerungum and Alex Sutherland Byatt and some tambourine shaking from Ian Bannister.

Wednesday 28th. Whistles from Déaglán Ó Braonáin, bass drum and hand drum from Willie Wilson. (Thanks for helping out Bert).

Thursday 29th. Another busy day at the office. Piano from Terry Butters, some moog beeps from DJ Jack The Lad, harp lines from Dave Sutherland, mandolin from Barbara Ann Burnett and flute from Peter Hawkey. It's all go!

Friday 30th. All coming together, but a bit of a challenge. Twenty seven people, so far, on a twenty four track machine. It's an old school 'bounce whatever you can and hope for the best' deal, just like it was in the tape machine days. Decisions have to be made, and that's not really my thing, but I'm sure it will all be alright on the night.

Saturday 31st. Well, that's just about it. Last day for input and working on the final mix and then the tune will be off to Richard Werner for a mastering once-over at his studio in Edinburgh. The master will then be on its way to Olly Nicholls and dropped onto his 'Waterfall' vid. What happens after that? Not sure yet, but Olly will upload the finished item to somewhere on the web and I'll have a few days away from speakers and headphones. My ears could do with a break.

Monday 2nd. Job done and off to be mastered and put onto Olly's waterfall video later today. It was a whole new experience for me, nothing like my usual approach to making music. With so many players involved, each creating their own part, it was more like doing a jigsaw puzzle with one hand tied behind your back and no picture on the box. Great that so many people managed to work together on this and do their bit for 'The Great Green Wall'. Cool.

Tuesday 3rd. Richard at B&B studio gives the master a check out for levels and stuff and fires a copy of the final master to Olly Nicholls.

Wednesday 4th. Olly puts the track on his video and uploads the finished job to his youtube page. I put a link on my facebook page and that's it, job done.

I wrote the song in about five minutes then spent the next three weeks working on the production as the bits and pieces of music arrived in my email box. A bit of a task at times, but it all worked out fine in the end, and this is what we got: