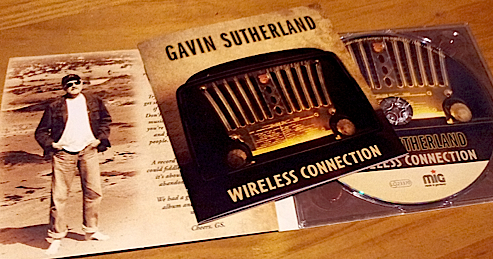 "I feel a wireless connection,
'Tween me and you.
Right now I'm getting good reception,
Yeah, the signal's coming through!"

'Wireless Connection' was written, recorded and produced during the winter of late '16 and early '17, in Gardenstown, Banffshire, Scotland. It is scheduled for release autumn, 2017, on the Hanover based MIG Music label

An organic approach to writing and recording works best for me. Get an idea, knock up a sketch, rough out the general shape and see where you can take it from there. Try a few things and maybe get some musicians and singers onboard if that's how you feel it should go. Don't get too hung up on words and musical detail, all that will happen if you're onto something worthwhile and you're working with the right team. Let one thing lead to another. Let it grow.
Records are never really finished, you could fiddle around with a song forever, it's about finding the right time to abandon it, let go and move on.

So here it is, 'Wireless Connection', a bunch of tunes that I hope might lighten the load a little in these strange and troubled times. I was asked 'Is it country?' Well it's not 'city'. I'm a country boy at heart and the addition of a pedal steel guitar on a couple of tracks certainly pulls it all in that direction. With my roots in North East Scotland, a part of the world well known for its fiddle tunes and folk songs, it's pretty clear that the traditions of my homeland have influenced my approach to making music. Maybe there's some 'do re mi' in the DNA? The dance tunes that went across the Atlantic with Scots emigrants and morphed into blue grass and the old folk ballads that gave birth to country song and 'Americana'. It's all there. Speed it up, add a back beat, and there you have it, rock 'n' roll, the stuff that connected with me and so many others as we tuned into to the 'wireless' back in the day.

I want to thank friends old and new for their help along the way and hope listeners out there enjoy our record and find a connection with what we've done. Cheers, GS.

Tune in for a quick listen . . .
Hit the dial to fire up the old wireless if you'd like to hear a few snippets from the tracks. They're short n' sweet but enough to give you a flavour of what it's all about.

Conversations with travelling folk from a generation who remember the days when their families and company of friends took to the country roads in horse drawn caravans, and hearing the stories and songs of their intimate bond with the natural world, stirred the romantic in me. My thoughts were of freedom, innocence and happiness, but some of the realities, I'm sure, may well have been quite different. A pal wondered if there might be a nod in Margaret 'Peggy' Atwood's direction somewhere in there. Well, if there is, that's fine with me.

Peggy told me things I didn't know,
She told me about the river, and the way it flows
By the road to Lumphanan
Where summer breezes blow.


She told me about the days when the wheels rolled round
On the old rocky road, as the sun went down,
Yeah, Peggy told me some things I didn't know.

She told me, a hand was there to hold me
And time would show me,
Where I belong.

Gone are the days when the big wheels turned,
Gone are the nights when the lamplight burned,
I'll raise a glass to Peggy, and the comfort I found
When she told me, she'd be there to hold me
And time would show me,
Where I belong.

Yeah Peggy told me things I didn't,
Tales of the river and the way it flows
By the road to Lumphanan
Where the wild heather grows.

A glass of wine, relaxed in the summer sun, and a toe-tapping groove was born in a daydream.

Life's an unpredictable game, so let's all enjoy the ups and deal with the downs as they come our way. That's about the top and bottom of it.

A thousand colours, light up the sky,
On a night like no other, shooting diamonds fly,
You stand beside me, and offer me your hand,
Together we wander, in a wonderland,


I don't want to waste my time on the trouble of the day,
Find a place to lay my head and dream my dream away.

We call up the piper, he plays a tune,
A tune like no other, to a raging moon.

I don't want to waste my time hung up in blue
Find a place to lay my head and dream my dream with you.

The stars were falling, as the night turned black,
My dream was stolen, but I got it back!

I don't want to waste my time on the worry of the day,
Find a place to rest my head and dream my dream away.

The connection we have with each other, the radio that brought a world of music into our living rooms and now the global web connection we all take so much for granted that it feels like it's always been here.

If I had wheels I would roll to you,
If I had wings I would fly
If I could speak I would talk to you,
Sometimes words are hard to find.

I feel a wireless connection,
Between me and you,
Right now I'm getting good reception,
Yeah the signal's coming through!

If I had wheels I would roll to you,
If I had wings I would fly
If I could speak I would talk to you,
I got so much on my mind.

It started with a line from a nursery rhyme on a wax disc, and from there grew a massive industry. The vinyl record manufacturing business, with those magical microgrooves bursting full of sound. What would life have been like without them?

There are times when I wonder,
What the next move's gonna be,
And there were times I thought I might go under,
But you were always there for me.

Oh the microgroove, came to save me
Turn away those late night lonesome blues,
The microgroove, would not forsake me,
Forever there beside me, tried and true.

A tune I wrote some years ago, right here in the old Seatown. The song just appeared in my head as I watched the storm out over the bay. Wish it was that easy every time! I found the words I'd scribbled down in an old note book a couple of months ago and decided it might be worth a revisit, maybe with some strings in the mix? Really enjoyed voicing the cellos and great to have the lines played by a fine player who lives nearby and who taught my youngest daughter cello when she was at school.

The wind was coming off the sea that night,
Blowing hard on me that night,
The moon above was clear and bright,
After the storm.

There was something in the air that night,
Something kind of rare that night,
I think I must have seen the light,
After the storm.

I was looking for a friend of mine,
Another place, another time,
I didn't see the warning sign,
After the storm.

It's time to hit the road again,
Carrying the load again,
Yes and reaping what I sowed again,
After the storm.

A photograph or a chance meeting can often bring distant memories to mind.

Now those days are gone, but the memory shines on
In the warm summer sun, down the Old West Road.

When we were young, our hearts beating strong,
We laughed we'd run down the Old West Road.

Watching the Northern Lights dance across the night sky always brings out the 'who, what and why' in me. I've been fortunate enough to have seen the giant light show many times, but it never ceases to amaze and bring about a magnificent sense of wonder.

What will I write, when the time comes around?
A tale of how the world turned upside down.
What will I be, when the day is done?
A rabbit in the headlights, a circle round the sun.

All that bold endeavour, so much comes to mind,
A flicker in the darkness, a light forever shines.

What will I do, when the well runs dry?
I'll be thinking about the who and where and why.
What will I see, when I look into those eyes?
The Merry Lights dancing, 'cross the sky.

All that bold endeavour, so much comes to mind,
A sparkle in the darkness, a light forever shines.

What will I see, when I look into those eyes?
The Merry Lights dancing, 'cross the sky.

Hard to imagine just how clean and wonderful our planet must have been before we humans came along and started messing things up. 'Progress' is an interesting word.

Looking for answers, looking for clues,
Taking chances, paying my dues,
Some got the money, some got the luck,
Looking for reasons and coming unstuck.
These are the things that've troubled me,
Ever since the creature crawled from the sea.

Always nervous and insecure
Never quite certain, never too sure.
Wars n' roses, pleasure n' pain,
Hung out to dry, now they've done it again.
These are the things that worried me
Ever since the monkey came down from the tree.

Reading Revelations, it's in the book,
The Quaker quaked while the Shaker shook
Turn the land, plant the seed,
The Reaper comes along and takes what he needs,
These are the things that have mystified me,
Ever since the monkey came down from the tree.

The trials and tribulations of a guy born in Scotland, brought up in England by his Scottish dad and English mum. So, here I am, quite happily, somewhere between the thistle and the rose.

No political agenda, no business plan,
Thrown into the lions' den,
I don't wanna go there again.

No space to wander, no place to hide,
The river is a flowing pen,
I'll pick it up and start again.

We walk on ice, we walk on air,
Stepping out together to get somewhere,
One day we'll be there.

Reflections of my roots and the hymns and songs I heard as a young lad, sung with passion in the local kirk by a community whose livelihood came from the sea. It's impossible to ignore the unfairness of what goes on around the world, and neither should we. It's always been the case, and probably always will be, but things just might get better if we try a little harder?

I don't know much about this logic that you speak,
Still confused by all the secrets that you keep,
Now I must hold on to what I know is true,
I'll put my trust in you.

We're all in this together, well so I hear them say,
We'll ride the heavy weather, find a brighter day,
There's a calm on the horizon, go steady with the craft,
She's taking water fore n' aft

Show mercy to the innocents, with trouble at their door
All the lost n' lonely who've seen it all before.

Kindness is priceless. Yes, John, some may say you're a dreamer, but you're not the only one.

So many precious things,
To help it roll along,
Out of darkness,
Comes the nightbird's song.
The wonder of a dream,
The magic in a smile.
And a kind word,
From a good heart,
Means everything.

The days will come by,
When the blue sky turns to grey,
And all the plans you made,
Somehow slip away.
At times like this,
When nothing's going right,
And a kind word,
From a good heart,
Means everything.